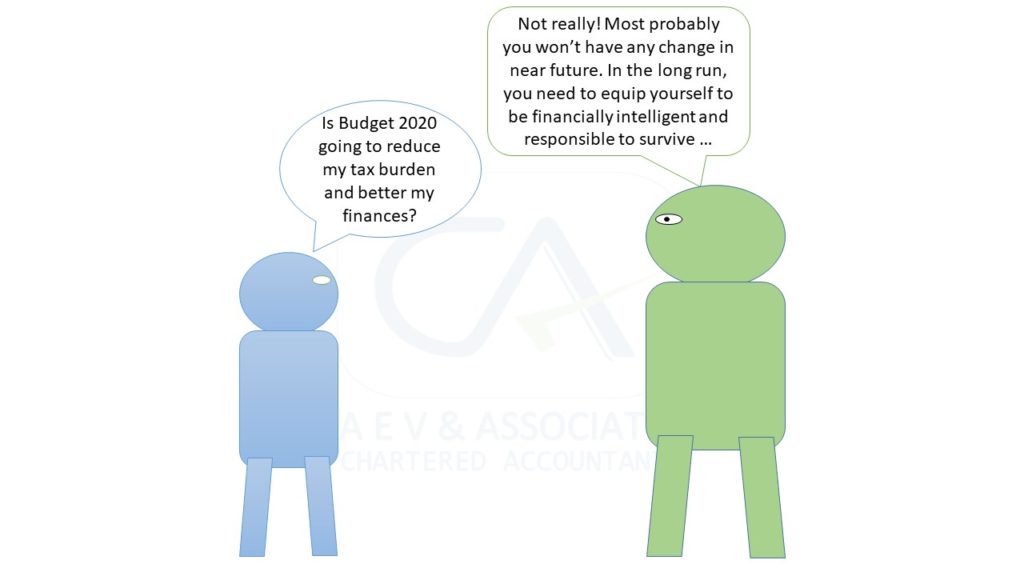 Union Budget 2020 is out and its confusion all around with multiple interpretations floating all over. Just like last year, the Finance Minister’s presentation of the direct tax changes was not given with the right context and impact. You can read our blog on the interim budget 2019 here. This time minister presented the income tax changes as “In order to provide significant relief to the individual taxpayers and to signify the Income-Tax law, I propose to bring a new and simplified income tax regime wherein the income tax rates will be significantly reduced for the individual taxpayers who forgo certain deduction and exemptions”. So all of us waited for the proclamation of the good days to come, but it was not what it was meant to be.

Myths out for sale …

Myth 1: Most of us will shift to the simplified new tax regime where the tax rates will be significantly reduced …

Myth 2: Income tax rate is made ZERO till 5 Lakh …

Overall direction of the budget is that in few years Government expect the taxpayers to become Financially intelligent and responsible to take their own decisions than the Govt. guiding them. Now we are in a transition period, during which the taxpayers are expected to make a choice between the old ‘complicated’ tax regime and the new ‘simplified’ tax regime. Of course, it comes with its own burdens – to the tax payers and to the employers/companies who’ll bear the operational intricacies. We’ll also look at some of the associated tax changes to traders / investors amongst us and the NRI crowd

Government feels that the existing tax regime is much more complicated than what it is meant to be. In their view, taxpayers must be able to decide on the taxation matters themselves without the aid of a CA or a tax practitioner. So they have simplified the tax structure by removing all the “complex” clauses / sections from the law and also reduced the slab-wise tax rates and made them more granular.

An isolated view of this slab change obviously gives a rosy picture, but the caveat of forgoing certain exemptions and deductions was much larger than what was thought to be. With the new tax slab structure goes off most of the exemptions and deductions that were availed by the masses till this year. For most of the taxpayers, the deductions and exemptions served more than mere tax savings – it used to be their guideline for making investments and building retirement corpus. Government used these as instruments for channeling the public money. So essentially the existing regime could be called as “Government Guided Regime”. With the new tax structure, Govt. is essentially taking off all those guidelines and giving money in the hands of taxpayers and telling them to decide what’s best for them amongst the gamut of public and private offerings in market. It assumes or wants the individual taxpayer to be more intelligent in financial decisions. So the new regime could be called as “Intelligent Investor Regime”. Government intends to move away from the Government Guided Regime (GGR) to the Intelligent Investor Regime (IIR) in the coming years, but has decided to keep both open for the taxpayer to choose from. This has resulted in more confusion for Individuals as they need to understand the exact exemptions that are removed in IIR and also calculate / choose between GGR vs. IIR – question remains whether Govt. simplified the tax regime or not.

First Things First – Should you go for GGR or IIR?

Most of us are busy trying to calculate the tax outgo in both regimes so that we can choose the right one in two months, at the beginning of the next financial year (or whenever the Parliament passes The Finance Act, 2020. To simplify decision making, as a rule of thumb anyone with one or more of the exemptions such as HRA, LTA or deductions such as Standard deduction on Salary, PPF, LIC premium, Mediclaim premium or eligible losses such as loss on housing property (which includes Housing Loan Interest) will benefit from sticking with GGR, as the exemptions from these outweigh the benefit of the lower tax rates. Most of us won’t be able to take sudden break in the outgo towards LIC, Housing Loan, HRA etc and hence sticking on to the old regime (GGR) will make better sense.

To make things more easy for you, here is a custom calculator designed in Microsoft Excel for you. You may download this and work out tax outgo in the existing and the new regime. I haven’t designed a webpage or app for the same so that your data and numbers stay with you only without any risk to you. I hope it really helps you in taking informed decisions in this regard.

What’s the future holding for us?

Indian Individuals are taking a new turn, one were they are choosing between two given tax regimes to start with (GGR vs IIR) and very soon in few years you will be thrown out to the financial market without any Govt. guidance on where to invest your money or to just spend it. It may benefit the businesses with better & cheaper funding options. Govt. also may not be at a big loss as they are set to gain from the growth in indirect tax(GST) from all the spending from tax payers. Individuals, unless they become financially prudent and intelligent, will need to become more responsible and data driven in their decisions. There won’t be any Govt guidance to channel you to investments, mediclaim, life insurance, retirement savings and so on. Irresponsibility can cost you very badly as Govt.’s may not make it good as they are also in fiscal deficits.

Freshers joining companies at those times might not even hear about investment options like we used to hear as tax saving was the only reason we used to get to these instruments in the first place – indirectly building our future corpus. Country might need more Financial Therapists for the masses. It’ll be a level ground for all private players to get public’s money, just as the Govt. guided financial products today, as there’s no tax preference for anyone.

Will the private guys be conservative enough to keep the public’s trust and money safe? Its for time to tell …

What has changed for Investors and Traders in the Stock / Derivatives Market?

Tax audit limits have changed from current 1 crore to 5 crore, with conditions to minimize cash transactions and expenses within 5% of the sales / turnover / gross receipts, with all other conditions remaining same.

Dividend which used to get taxed in the distributing companies end will now get taxed at the receivers end. So those in 25% or 30% slab rate will be at a disadvantage as Dividend Distribution Tax (DDT) used to be lesser than thesse rates.

What has changed for NRI’s?

Initial provisions in the Bill suggested that Govt wants to take better control over the NRIs who escape taxation by being in different countries during the year – by changing the number of days outside India to be an NRI from 182 days to 240 days. It also suggested a plan to tax any Indian citizen without any other jurisdiction’s tax citizenship on their global income. However they are seen clarifying and changing these stances later the next day and hence it’ll be a wait and watch to hear the final clauses.

Overall, its a game changer for India. It gives more responsibility to the Individuals and if they are not empowered appropriately, this move will backfire in the long run. Its time to start building your financial acumen. Gear up yourself for the new direction that Financial India is taking.